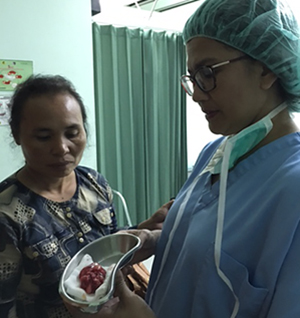 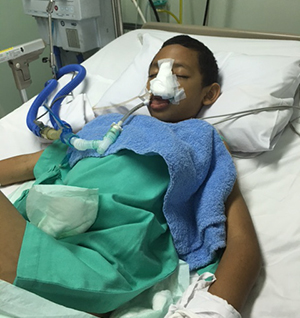 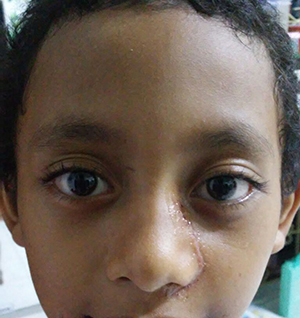 We help those who require medical consultations and treatment but cannot afford the help they need. Our patients suffer from chronic diseases such as diabetes, nephrotic syndrome (kidney disorder), stroke, cardio defects, etc. Our care for them is for the long term and funds are needed for their treatment and regular check-ups.

Click here for story of our heart patient Gian Ronan who underwent surgery in January 2016.

In early April 2016, our Towdah Uban orphanage houseparents Bima and Titri told us about an 11-year-old boy named Trio who had to be rushed to the hospital in the middle of the night due to profuse bleeding in the nose. Trio lives five minutes away from our orphanage in pretty poor conditions.

Bima sent us photos of the scans and some medical reports done previously in Uban/Pinang which were later shown to doctors in Singapore. They confirmed that he was suffering from Juvenile Nasopharyngeal Angiofibroma (JNA). He had a huge tumour growing behind his nose. Although the tumour was benign, it was obstructing his breathing and he could only breathe through his mouth which made it difficult for him to eat, sleep and focus in school. Eventually, he stopped going to school because he was tired all the time.

We prayed. We waited. The Lord answered. He gave us the contact of an ENT Oncologist in Jakarta through a Singapore dentist/friend. Within a few days, we booked our tickets to Jakarta and arrived on Thursday, 21 April. When we met Dr Marlinda Adham, we knew instantly she was the right one. She not only had experience and the skill but also tremendous compassion and kindness. We were deeply moved.

We had intended only to consult Dr Marlinda and return to our respective homes but she said that since we were already in Jakarta, we should proceed with the embolisation followed by surgery (extraction of tumour). The embolisation was done on Saturday, 23 April and then surgery on Tuesday, 25 April. By God’s grace, the tumour which was about 7cm long was removed without complication. Trio was able to breathe again!

He was discharged from the Jakarta hospital on 2 May and returned to Uban on 3 May. He stayed at our orphanage for one and half weeks as he was still feeding via a tube. Now that all the stitches have been removed and he is able to eat soft foods, he has returned to his own home. 5miles will continue to pay for his follow-up and our staff will monitor his health.

* Embolisation is a minimally invasive surgical procedure by an interventionist radiologist to prevent blood flow to an area of the body, which can effectively shrink a tumor or block an aneurysm. In Trio’s case, it was to block blood flow to the tumour to avoid massive bleeding.

God’s timing is always perfect. His provision  is also truly amazing. He provided accommodation in Jakarta for Trio, mum Yani and our staff Titri at a friend’s one-bedroom apartment very near the hospital while I stayed with my primary and secondary school buddy, Ratni. She was a great asset to us all. So was the surgeon.

There are times God gives us the courage and faith to say ‘yes' when He calls. This was one of those times.

19 “Do not store up for yourselves treasures on earth, where moths and vermin destroy, and where thieves break in and steal. 20 But store up for yourselves treasures in heaven, where moths and vermin do not destroy, and where thieves do not break in and steal. 21 For where your treasure is, there your heart will be also.